Mumbai Indians continued their unlucky spell this IPL season as the skipper Rohit Sharma team, defending its score was beaten in a close competition narrowly in a stunner on Sunday.

Mumbai Indians batted first and scored a low modest score of 167. The beginning for the Mumbai Indians was promising but bad and irresponsible cricket by the middle order batsmen spoiled the party. 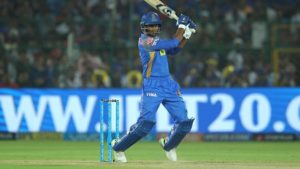 Rajasthan Royals, while chasing 168, lost its two openers Rahul Tripathi and Rahane very early and were struggling at 28 for 2 in the beginning, but batsmen Sanju Samson and Ben Stokes created a 72 run partnership for the third wicket helped to take the game away from Mumbai Indians.

But things changed with Krishnappa Gowtham, batting at number 7, who turned the tables on Mumbai Indians and stepped up his game and saw the team through hitting a six of the 4th ball of the final over of Hardik Pandya

Krishnappa Gowtham smashed a quick-fire 33 off just 11 balls to see Rajasthan Royals through and he made sure that they did not lose their way and made them finally win at the Sawai Mansingh Stadium in Jaipur.

This win over the Mumbai Indians helped Rajasthan Royals move up the Vivo IPL points table too.