Royal Challengers Bangalore notched up a convincing six-wicket win over Delhi Daredevils in their IPL fixture at the M Chinnaswamy stadium on Saturday night.

AB de Villiers hit a brilliant 90 of 39 balls to make the win possible. AB de Villiers hit 6 sixes and 10 boundaries in his classic innings and helped RCB chase down the 175 target. RCB won with two overs to spare. Moreover, De Villiers also shared a 63 run partnership with skipper Kohli who scored 30 and he added 56 runs with Anderson who went cheap for 15. These partnerships and De Villiers amazing knock helped RCB to win over the Delhi Daredevils. 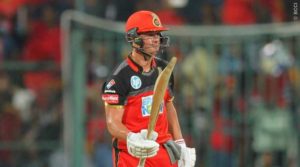 While Delhi Daredevils were batting first, Rishab Pant and Shreyas Iyer, both youngsters made half-centuries to take the Daredevil score to 175, which is a respectable total.

Pant scored 85 and had a 75 run partnership with Iyer who scored 52 off just 31 balls. Pant hit 7 sixes and 6 fours in his awesome innings.

For RCB while chasing, Vohra and Kock opened the innings but both went cheap as RCB were reduced to 29 for 2 in the 5th over.

Manan top edged a Maxwell delivery and Jason Roy held on to the ball, whilst Quinton hit a four and a six before being run out in the fifth over

De Villiers and Kohli added 63 together before an amazing catch by Boult on the boundary, which ended the partnership.

There was no stopping de Villiers as he hit 2 sixes and a boundary off Patel in the 13th over to score his 50 in just 24 balls.

Anderson joined de Villiers in the smashing attack but was quickly cleaned up by the Boult.

Earlier while Delhi Daredevils were batting first, RCB kept them down from the start as Umesh Yadav dismissed captain Gambhir for 3 in the third over. Daredevils could manage only 11 in the first 4 overs.

Coming first down Iyer scored 52 runs and smashed two 4’s off Yadav but soon opener Roy was cleaned up by Chahal for only 5 runs.

Then came Pant and got off the mark with a boundary as Daredevils reached 28-2 which was the lowest power-play score in this season. DD crossed the 50 mark in the 9th over as Iyer hit a six and a four off Yadav in his last over.

The young batsmen started piling up runs and got to 75 in 8.1 overs to make Delhi close to the 100 runs mark.