Many young hearts will break today as Milind Soman is all set to tie the knot with his girlfriend Ankita konwar in a special ceremony in Alibaug. The wedding will take place on April 22 said sources close to the model and actor. The Haldi and Mehndi ceremonies were held on Saturday. The duo dressed up in traditional Assamese attire for the functions. 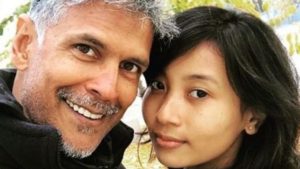 Keeping the ceremonies low key, Milind wanted to invite only a select group of close friends and family. Also amongst those invited were close family member and those colleagues and friends who support the actor’s fitness and social causes.

The guests gathered in Alibaug on Saturday.

Dipannita Sharma, the model-actress who was amongst the guest list told reporters on Saturday, “The mehndi was a lot of fun, with Assamese, Hindi and Marathi songs being played in the background. Everybody, including the couple, had a great time dancing.”

She added, “Even the decor was a mix of Assamese and Marathi cultures. The wedding will also be a blend of both cultures, as Ankita is from Assam and Milind is a Maharashtrian. They want to keep it simple. We can’t wait to see them married.”

Amongst speculation that the reception may be held abroad in a foreign location, where the newlywed couple will be hosted by a close friend’s family, there has been no confirmation of the same.

Ankita is also known as Sunkusmita Konwar has been Milind Soman’s girlfriend since last October and their union has received the blessings of his mother. Ankita is also a sportsperson who completed her first 10k marathon with Milind in 2015.

All and Sundry are looking forward to the wedding.