Rashid Khan the Afghan cricketer single-handedly took Sunrisers Hyderabad to their second IPL final as he helped the team score a 14 run victory over Kolkata Knight Riders in the Qualifier 2 in Eden gardens on Friday. 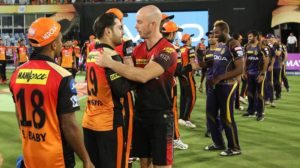 Rashid not only impressed with his bowling but also slammed runs through his bat and also fielded exceptionally well. Now SRH will play Chennai Super Kings on Sunday at Mumbai.

Rashid slammed an unbeaten 34 off 10 deliveries to take SRH from a low total of 134 for 6 to 174 for 7 after they were put into bat by captain Karthik.

Sunil Marine and Chris Lynn gave Kolkata a flying start and they were at this stage looking as if they would easily win the match. But then came in Rashid who took 3 wickets for 19 runs and turned the tables around for SRH, which helped them restrict KKR to 160 for 9

Rashid first clean bowled Robin Uthappa and he then took the wicket of Lynn while he was trying to sweep a delivery and then the next wicket he took was of Andre Russell as he edged one to the first slip. He also runout Nitish Rana with a fantastic throw from deep mid-wicket

Shakib removed the in-form Dinesh Karthik and clean bowled him as he was attempting an offside cut.

Rashid’s safe hand came into play in the last over when he caught India U-19 World Cup stars Shubman Gill and ShivamMavi to seal SRH’s victory.

SRH’s batting never really picked up and they never looked as if they would cross the 150 runs mark because of some excellent bowling by KKR. But because of Rashid, SRH gathered 61 runs in the last 5 overs.

Rashid hit Prasidh Krishna for one four and two sixes after Bhuvneshwar Kumar opened with a boundary as the last over yielded 24 runs.

It was Kuldeep Yadav, who drew first blood having Dhawan and skipper Kane Williamson in his first over of the match. SRH failed to have any meaningful partnership as the lost wickets at important junctions.