Rajasthan Royals beat Mumbai Indians by 7 wickets in the 47th match of the VIVO Indian Premier League 2018, chasing a decent total of 169 runs.

Hitting his 5thconsecutive half-century in the IPL this year opener Jos Butler was instrumental in the Rajasthan Royals victory as he smashed 94 runs. Butler now equals Virendra Sehwag’s record with this innings. 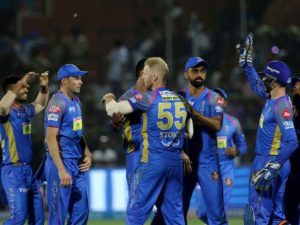 With winning this match the Rajasthan Royals have now moved to the 5th position in the VIVO Indian Premier League points table.

Skipper Ajinkya Rahane, was a strong support for Butler in the run chase as he smashed a compelling 37 runs. After Rahanes wicket fell Sanju Samson came into bat and did a fine job supporting Butler who was in full form. Butler with his compelling batting made sure that the Rajasthan Royals could easily reach the target of 170 to win the match.

Samson tried his best to accelerate the run rate but was dismissed for 26 runs. Finally Butler his a big six to win the game for the Royals by 7 wickets.

Earlier when Mumbai Indians were batting, they were off to a decent start as the openers Evin Lewis and Suryakumar Yadav made the best use of the powerplay field restrictions to take the Mumbai Indians to 51 runs.

Royals missed some easy chances and Evin Lewis started taking on the bowlers. He made his presence felt as he hit Gopal for 2 consecutive big sixes.

Mumbai Indians were 79 for nil after their 9 overs. Rohit Sharma failed to perform again and was out for a duck. Evin Lewis was in full form and scored a decent 60. Comming next to bat Ishan Kishan and Krunal Pandya failed to impress.

It was only because of Hardik Pandya’s important 36 runs which helped Mumbai Indians reach a decent total of 168 runs for 6 wickets.

Rajasthan fielders dropped a couple of sitters and were not their best on the field. Samson took a blinder of a catch and Archer bowled well taking 2 wickets.