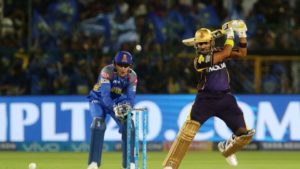 Excellent knocks by skipper Karthik who scored 42 not out and Nitish Rana who scored 35 helped KKR successfully chase the Royals target of 161 that too in the 19th over with seven balls to spare. The two ace players put up a match-winning partnership of 61 runs for the fourth wicket

For Rajasthan Royals, only spinner KrishnappaGowtham took 2 for 23 and was the only baller amongst wickets

Gowtham dismissed KKR opener Chris Lynn in the first over itself in the KKR run chase but that did not hamper the KKR spirits much and they carried on the run chase successfully.

KKR were 15 for 1 in three overs when Narine shifted gears and hit four consecutive boundaries of Dhawal Kulkarni in the 4th over. Uthappa also joined the party hitting three fours of JaydevUnadkat in the next over.

The run chase was going well before a mix up in the ninth over endedNarine’s innings, as Narine ran for a leg bye but was unable to get back to his crease.Narine hit a six and four boundaries in 35 runs of 25 balls to add 65 for the second wicket with Uthappa.

Uthappa and Rana put up a partnership of 32 runs for the third wicket but Uthappa fell to Gowtham in the 13th over as Stokes took a brilliant catch at long on.

Karthik and Rana made sure that KKR smoothly chase the modest target and that there were no hiccups in the run chase.

When KKR was bowling the trio of Piyush Chawla, Kuldeep Yadav and Rana restricted Rajasthan Royals to 160/8 in their 20 overs. The trio conceded only 52 runs in 10 overs and shared 4 wickets amongst themselves.

KKR’s Narine was unsuccessful as he went for 48 runs in his four overs and went wicketless. Fast baller Curran got a couple of wickets in the end overs.

Royals were never really in the game and were not able to build partnerships as Rahane who scored 36 off 19 balls and Short who scored 44 in 43 balls were the only two who added 54 runs while opening the innings.

Rahane hit four consecutive boundaries off Narine in the opening over itself.

Rahanes wicket fell when KKR’s captain Karthikcreated a brilliant run out while collecting the ball in front of the stumps.