The Supreme Court had banned CSK for two years and an emotional MS Dhoni broke down while talking about what the team meant to him. He will definitely break down if CSK are able to life the IPL 2018 trophy in their clash against SRH on Sunday. 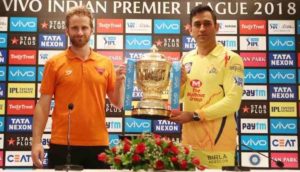 CSK was in no way a favorite and none gave them a chance after the auctions but surprisingly they have crossed all the hurdles and have secured a seat in the finals. Most of the players in the team are in their late 30’s like Imran Tahir: 38. Harbhajan Singh: 37. Shane Watson: 36. Dhoni: 36. Dwayne Bravo: 34. Faf du Plessis: 33 and thus much was not expected from them.

In one match they needed 47 off the last three overs and Bravo showed his class and hit a brilliant fifty as he played an innings of a lifetime with 6 sixes in his 30 ball 68 in an unbelievable victory for CSK.

In the next match Englishman, Sam Billings blasted 22 balls fifty to help CSK chase a mammoth 200 plus target against the Delhi Daredevils.

South African Ngidi took 4 wickets for 8 runs in a low scoring game against Kings XI Punjab in Pune and also Deepak Chahar was a great find for CSK as he bowled an expensive but splendid spell. Also Shardul Thakur proved expensive but bowled well keeping the batsmen guessing.

Also Suresh Raina and Ravindra Jadeja looked dangerous and in form as they attacked from the front. Also Ambati Rayudu batted so well that he was chosen for the Indian ODI team.

Watson and du Plessis also impressed with their performances against SRH .

SRH has also had an impressive run this IPL season and is that one team who can spoil CSK’s dream run as the Kane Williamson led team has performed extremely well, also under pressure. Williamson showed his class by slamming 8 fifties in 16 games scoring a total of 688 runs.

Also the most lethal weapon in SRH arsenal is Rashid Khan who single-handedly won the match against KKR in Eden gardens on Friday and secured a berth for SRH in the final against CSK.

The reason that the Sunrisers’ bowling attack is the best in this IPL, though, isn’t Khan alone. Bhuvneshwar Kumar, Siddarth Kaul, Sandeep Sharma and Shakib Al Hasan too have delivered brilliantly.