In the final of the Indian Premier League 2018, Chennai Super Kings won the competition and the trophy beating Hyderabad by 8 wickets to register a comprehensive victory. 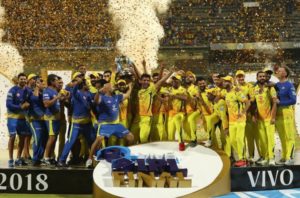 Chennai Super Kings’s Shane Watson single-handedly won the match for CSK by scoring a brilliant century in the biggest game of the season.

Chennai Superkings were coming from a two-year ban because of a match-fixing scandal but they showed their class this season and beat Sunrisers Hyderabad in all 4 matches against them this season.

All the Sunrisers Bowlers were out of form and leaving bhuvneshwar and Rashid, all the others gave away plenty of runs.

With this win CSK has now lifted the trophy for the 3rd time in the 7 finals they have played.

Bhuvneshwar Kumar bowled well and gave away only 8 runs and his figures were 1 for 17 in his four overs. Rashid bowled well but gave away 12 runs in his last over. He finally ended with 1 for 24 in his 4 overs.

Finally CSK needed 13 runs off 18 deliveries and Kaul came to bowl but Watson showed no mercy and won the game for CSK.