In the match held at the M Chinnaswamy Stadium in Bengaluru, Skipper Dhoni finished the run chase in his signature style by hitting a massive six as Chennai Super Kings beat Royal Challengers Bangalore by 5 wickets.

This has led to CSK gaining the top spot in the IPL ranking. 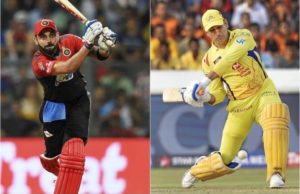 CSK has won five out of six games this season and Dhoni was instrumental in this victory blasting 70 off just 34 deliveries hitting 7 sixes and 1 boundary.

Dhoni and Ambati Rayudu who scored 82 created an unbeaten partnership of 101 off just 54 balls.

RCB has gone to the bottom of the table with 4 defeats in 6 matches this season.

In a thriller, CSK needed sixteen off the final over and Dwayne Bravo made it look easy by hitting a boundary and a six of the first two deliveries and CSK had to score just 5 of 3 balls to be victorious.Dhoni hit a six and took just one ball to take his team to victory

CSK began with a bolt from the blue as Shanee Watson fell in the very first over to Pawan Negi and then Rayadu hit 2 sixes off Washington Sundar to take CSK to 24/1 in three overs.

With the efforts of Rayadu and Suresh Raina CSK reached 50/1 in 5 overs. Raina was dismissed by Umesh Yadav in the 6th over.

Sam Billings hit 2 boundaries to reach 9 runs but was dismissed by Chahal in the 7th over. Chahal also took the wicket of Ravindra Jadeja to reduce CSK to 74/4

Captain Dhoni made his intentions clear from the beginning as he hit a 6 off Negi off the very second ball he faced. Dhoni and Rayadu revived the run chase as they took CSK past the 100 runs mark in the 12th over. Rayadu reached his 50 in just 40 ball and on the other side Dhoni smacked Negi for back to back sixes in the same over.

Dhoni completed his 50 off 29 balls by hitting a six of the 18th over bowled by Anderson. But only three balls later Rayadu was run out in a mix-up.

Now CSK needed 30 off the final 2 overs. Dhoni hit Siraj for a six and then Siraj bowled 3 wide balls to give away fourteen in the over, thus now CSK needed 16 of the final over.CSK reached the target easily and registered their 5th win in 6 matches.

While batting RCB’s de Villiers smashed a quick-fire 68 off 30 deliveries and hit 8 sixes and 2 fours while de Kock made 53 off just 37 balls to take RCB to a respectable total of 205/8.

RCB were off to a good start but then lost Virat Kohli, its skipper for just 18 to Thakur in the 5th over.

De Villiers hit Thakur for 3 consecutive sixes and Kock played a supporting role to de Villiers to perfection. De Villiers also hit a massive six which landed outside the stadium

Bravo brought some respite to CSK camp as he caught and bowled Kock with a slower delivery in the 14th over.