It’s a pleasant surprise to see a film like Veere Di Wedding doing well at the box office. The film released on 2177 screens in India and is predicted to having anRs 35 crore weekend.

Veere De Wedding has already grossed Rs 22.95 crore in its first few days and is showing no signs of slowing down or fading away. This a big feat and it is the first time that an all-women led cast film in Bollywood has received such a response. 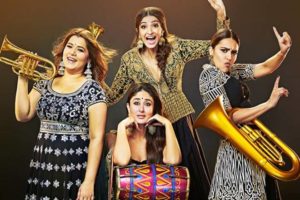 The success of the film is because of many factors and of course Kareena Kapoor and Sonam Kapoor has instilled the star power but they are not the only reason for the film’s success.

The publicity for the film was phenomenal and all the 4 leading ladies were given equal importance and due credit.

Rhea Kapoor is the producer of the film and took a backseat allowing the leading ladies do all the promotions.

This is a new concept for Bollywood which is not used to all female films. And the focus of the publicity campaign was to promote the film as a fun filled female buddy film and its seems to have struck a chord with the audience.

The film got people talking on social media, and it released just when the conversation around it hit the optimum.

Plus, the makers refrained from calling it just a ‘chick-flick’. Rhea Kapoor, in a statement to IANS, said, “Calling the film a chick flick would put it in a bracket. At a juncture where we are trying to break away from labels, it’s high time we had a film that doesn’t judge women and at the same time is aspirational.”

Use of the term ‘aspirational’ probably did the trick. It attracted the urban female viewers who saw the film and appreciated it. Veere Di Wedding made noise among the viewers it wanted to target.