Anil Kapoor and his family in collaboration with the Ahuja’s have finally confirmed Sonam Kapoor and Anand Ahuja’s wedding to be held on May 8th in Mumbai, putting an end to all speculations. 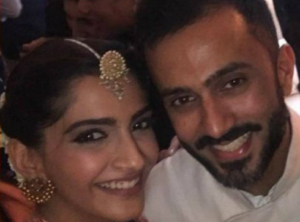 “The Kapoor & Ahuja families, take great joy and pride, in announcing the marriage of Sonam&Anand. The wedding will take place on the 8th of May in Mumbai. Since it is an intimate affair, we request you to respect the family’s need for privacy. Thank you for all your blessings and love, as we celebrate this special moment in our lives.”

Sonam Kapoor is back home a week before the wedding and the preparations for the biggest star wedding of the year are already on full swing according to sources.

According to reports, the Mehendi ceremony is stipulated to be held at Sonam’s aunt’s residence in Bandra on May 7 and all the big names in Bollywood including Karan Johar and Arjun Kapoor will grace the occasion.

Earlier there were speculations of a destination wedding doing the rounds, but this announcement has brought an end to that as it is now confirmed that Sonam is going to get hitched to Anand in the month of May in Mumbai itself. The preparations for the wedding have already started.

Reportedly, Sonam and Anand will tie the knot in Mumbai on May 7, 2018. Although the ‘Neerja’ actor is too occupied with the promotions of her upcoming movie ‘Veere Di Wedding’, the wedding queries seem to be unending.

According to sources, Sonam will get back to work from July onwards, and she will be shooting for Shelly Chopra Dhar’s directorial debut, ‘Ek Ladki Ko Dekha Toh Aisa Laga’ and after which she is committed to Abhishek Sharma’s ‘The Zoya Factor’, starring Dulquer Salmaan as the male lead.

ALSO READ – THE BOX-OFFICE THIS APRIL