Rajasthan Royals beat Chennai Super Kings by 4 wickets, in the 43rd match of the VIVO IPL 2018 at the Sawai Mansingh Stadium in Jaipur.

Butler got a new life as he was dropped by Bravo. Then Binny whacked Bravo for a six but was dismissed the very next delivery. 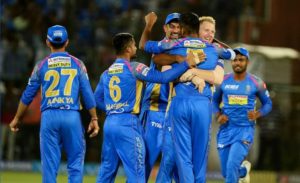 Then Krishnappa Gowtham joined Butler and out of desperation Butler tried to hit one over fine leg but Dhoni was not able to catch the ball and dropped him.

Then Willey came back into the attack and was whacked for a six by Gowtham, but soon Gowthams fun ended as he edged the delivery and Dhoni took a simple catch to dismiss him.

Butler this time hit a massive six and he got his team home with a ball to spare. Butlers 95 run innings was brilliant and mind-blowing and he was the reason for his team’s victory

This was Butler’s best knock in the IPL 2018 tournament. The Royals are still at the same position on the points table but this victory is keeping their hopes alive to make it to the playoffs.

Earlier when Shardul Thakur was introduced into the attack, Butler never looked under any sort of pressure, then Jadeja was brought in but Butler kept scoring runs and showed his class.

This was Butlers 5thconsequitive fifty in this year’s IPL. Moreover, Sanju Samson looked to accelerate and kept the scoreboard rolling.

Butler murdered each and every bowler brought into the attack by Dhoni. When Thakur was brought back into the attack Sanju went after him and attacked him comprehensively. Thus by the end of the 9th Over, Royals were 85 for 2. Earlier Bravo came into the attack and tried containing the run flow while giving only 3 runs in his over.

Butler and Samson hammered Willey as he was brought into the attack, but a huge mix up at the striker’s end saw Samson sacrificing his wicket for Butler. Samson went for just 21 runs.

Then came debutant Prashant Chopra as Royals were 104-3 in 12 overs.

Earlier Jos Butler and Ben Stokes opened the inning. David Wiley was into the attack. He was a man on a mission as he smashed three fours to Wiley.

Butler smashed 13 of the first over thus setting the stage for the run chase. Harbhajan Singh came to bowl the second over of the innings and Butler was on fire as he used his pace while hitting the bowl to the fence.

Next Ravindra Jadeja was brought into the attack but Butler hit him for a boundary taking the core to 33 for naught.

Stokes struggled but he finally dispatched Bhajji for a six before Bhajji cleaned him up.