Kings XI Punjab registered a 4-run win over the Chennai Super Kings in Mohali on Sunday.

It was Gayle who led Kings XI to a thrilling victory while Mohit Sharma kept his cool in the end. 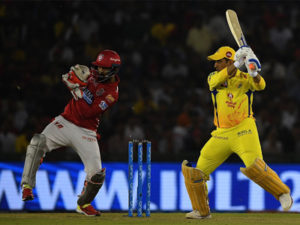 Gayle stroked a magnificent 63 runs from 33 balls, which included seven fours and four sixes, which allowed the hosts to reach a mammoth 197/7 in their stipulated 20 overs.

For Chennai Super Kings it was MS Dhoni who scored a career-best 79 off just 44 balls but the knock failed to take CSK to victory.

Ravichandran Ashwin’s leg spin claimed Sam Billings in an LBW. Although the umpire didn’t give him out, DRS came to Ashwin’s rescue.

Dhoni’s injured back didn’t help their cause either as he had to call in the physio for treatment.

Mohit Sharma had the unenviable task of defending 17 runs in the final over.

He started by bowling yorkers outside the off-stump, which Dhoni struggled to hit due to a jarred back. In the end, it was enough to guide KXIP to their third victory.

It was an intense game with the match swaying from one direction to another. In the end, though it was Gayle story as the KINGS XI side claimed victory as the batsmen of CSK failed to set up a tough enough fight.

Dhoni’s brilliant knock went in vain as in the end Kings XI claimed victory even though Dhoni hit a six on the last ball of the competition.