Kolkata Knight Riders snatched a victory from the jaws of defeat as they defeated Rajasthan Royals in the Indian Premier League Eliminator by 25 runs at Eden Gardens ground in Kolkata on Wednesday.

Captain Karthik batted splendidly while Andre Russell came out with a splendid all-round performance leading to a victory and securing a berth with Sunrisers Hyderabad for a place in the finals of IPL2018. 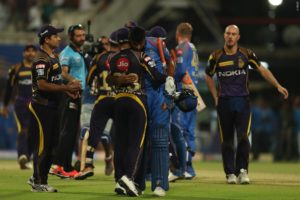 While chasing a target of 170 runs, Royals openers Rahane and Rahul Tripathi accelerated from the very beginning hitting boundaries from the word go. Both the openers put on a partnership of 47 runs in just 5 overs and RR were looking good and It seemed they would easily win the match.

But then spinner Piyush Chawla did the trick for Kolkata as he got the wicket of Tripathi who went for 20 runs. Next came Sanju Samson and he and Rahane got busy creating another partnership.

The two played cautiously and took RR’s score over the 100 runs mark by mostly taking singles and doubles. Just as things were looking good for RR Rhane’s vigil out in the middle ended when he was eliminated by Kuldeep Yadav for 46 which was the end of the 62 runs partnership for the second wicket.

Samson was going good and RR looked very much in the game and it looked like they would easily win as Samson crossed the 50 runs mark making it his 3rd half century in this year’s IPL. Samson made a fifty off just 37 deliveries.

Samson though was dismissed soon by Chawla and Stuart Binny was also soon dismissed by Prasidh Krishna for a duck.

RR needed 34 off the last over in an impossible task and Andrew Russell did the job for Kolkata by giving away only 6 runs of the penultimate over. Finally, RR fell short of the target by 25 runs and lost the match

Earlier KKR lost the toss and were put into bat by Rahane. Sunil Narine started well by hitting a boundary of the first ball he faced but was soon dismissed of the very next ball by Gowtham.

Gowtham struck again in the first ball of his second over as he caught and bowled the batsmen on strike. Uthappa got a leading edge and was dismissed soon.

The impressive Jofra Archer struck in the fourth over of the innings to send back Nitish Rana as the hosts slumped to 24/3.

Next skipper Karthik joined Chris Lynn on the crease and started attacking from the beginning as he hit Unadkat for 3 boundaries in the last over of the powerplay.

Soon Chris Lynn was dismissed in the eight over by Gopal and there seemed to be no respite for KKR.The Aussie playing a subdued knock of 18 off 22 deliveries on a slowish pitch.

Shubham Gill joined the captain on crease and both of them started the repair job together to put the innings back on track. They played sensibly and cautiously but finally started to attack as they hit Gopal for 2 sixes and a boundary in the 14th over.